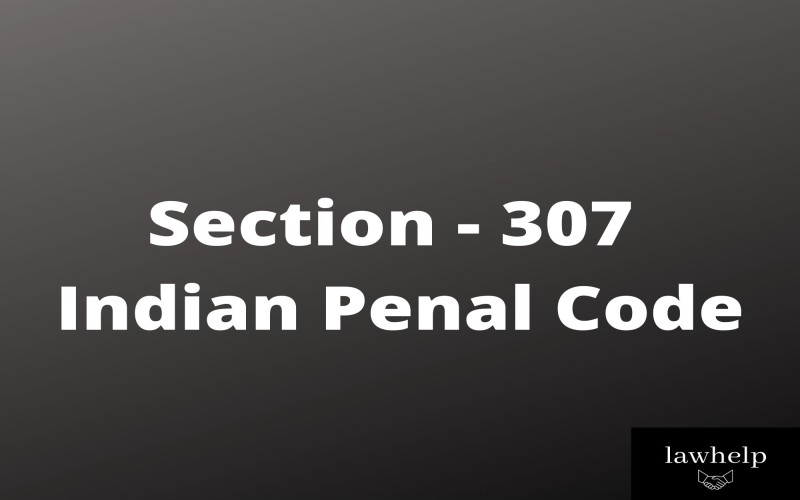 Section 307 IPC of the Indian Penal Code defines “Attempt to Murder”. In a Simple language if any person do such act with intention to kill somebody, which in normal course of life can cause death of the other person then this Section 307 IPC will be attracted.

Whoever does any act with such intention or knowledge, and under such circumstances that, if he by that act caused death, he would be guilty of murder, shall be punished with imprisonment of either description for a term which may extend to ten years, and shall also be liable to fine; and if hurt is caused to any person by such act, the offender shall be liable either to imprisonment for life, or to such punishment as is hereinbefore mentioned.

When any person offending under this section is under sentence of imprisonment for life, he may, if hurt is caused, be punished with death.

If a person is convicted under this section then he can be awarded Imprisonment for life or imprisonment of 10 years or fine.

Offences under Section 307 IPC are exclusively triable by the Sessions Court. To justify conviction under section 307 IPC it is not essential that bodily injury capable of causing death should have been inflicted. It is sufficient in law to convict a person if the intent to kill coupled with overt act is present in the case.

Section 307 IPC is non-bailable that means police officer or the magistrate court cannot grant him bail. Person has to move to the Sessions Court or the High Court for the Bail.

If a person accused of Section 307 IPC wants to file Anticipatory Bail then he can directly move to the concerned High Court.

Compromise in Section 307 IPC, allowed or not?

In the case of (Narinder Singh & others Vs State of Punjab & anr, 2014) Hon’ble Supreme Court laid down the criteria for the High Courts to follow in allowing or disallowing the compromise under section 307 between the parties.

Offenses under Section 307 IPC falls in the category of heinous and serious offenses and therefore is to be normally treated as a crime against society and not against the individual alone.

However, the High Court should not rest its decision merely because there is a mention of Section 307 IPC in the FIR or the charge is framed under this provision.

It would be open to the High Court to examine as to whether incorporation of Section 307 IPC is there for the sake of it or the prosecution has collected sufficient evidence to prove their case. The evidence if proved would lead to proving the charge under Section 307 IPC.

Having said so, we would add that though it is a very serious offense as the accused person attempted to take the life of another person. At the same time, the court cannot be insensible to hard realities.

That many times whenever there is a quarrel between the parties leading to physical upheaval and sustaining of injury by either or both the parties, there is a tendency to give it a slant of an offense under Section 307 IPC as well.

Therefore, only because FIR/Charge-sheet incorporates the provision of Section 307 IPC would not, by itself, be a ground to reject the petition under section 482 Cr.P.C. for compromise. This alone should not be the ground to refuse the settlement between the parties.

We are therefore of the opinion that while deciding as to whether compromise in such cases should be allowed or not. The High Court should go by the nature of injuries sustained.

On basis of that, if it is found that there is a strong possibility of conviction under Section 307 IPC. Once the evidence to that effect is led, injuries & charges proved then the Court should not accept settlement between the parties.

On the other hand, after prima facie assessment of the aforesaid circumstances, if the High Court concludes that provision of Section 307 IPC was not necessary to be included in the FIR/charge sheet, the Court can accept the plea of compounding of the offense based on settlement between the parties.

If you have any questions regarding Section 307 IPC you can ask in the comments section below.