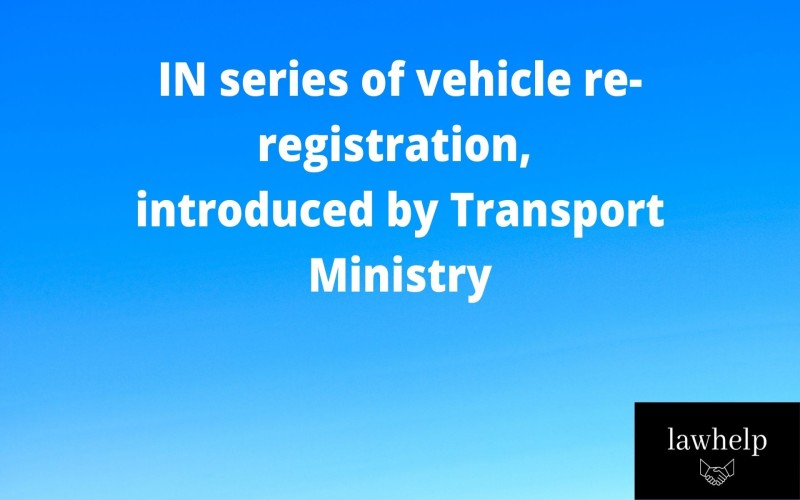 IN series of vehicle re-registration

To address the issue of the complicated procedure of transferring and reregistering motor vehicles across various Indian states, the Ministry of Road Transport and Highways under the leadership of Shri Nitin Gadkari has proposed another arrangement of vehicle registration on a pilot project basis.

In the new framework, assignments would be set apart under what they call the “IN” arrangement. As of now, various Indian States get their vehicles registered under their state codes like PB, HP, MH, HR, CH, GJ, TN, WB, etc

The problems associated with the problem related to vehicle re-registration can be explained with the following real example.

One Army officer was posted at Chandimandir cantonment in the state of Haryana.

During her posting, she purchased a Vehicle financed by the State Bank of India. After completing her 3 years posting at Chandimandir Cantonment she was transferred to Jodhpur. Now the loan taken on the vehicle has been returned fully and Bank has issued NOC for releasing the hypothecation of the vehicle.

The transport department of Jodhpur where she is presently posted cannot do anything in this regard nor can she pursue her case sitting at Jodhpur with the State of Haryana.

The proposed new arrangement of IN series of vehicle re-registration would be very helpful for such officer who are frequently transfered from one state to the other as per the requirement of their job.

In the new arrangement, the tax on the vehicles would be levied for two years instead of 15 years as is the practice now. This arrangement will also bring down the prices of those new and old vehicles.

It is yet to be made clear by the concerned ministry that will there be a compulsory fitness test for such vehicles going for IN series number as is the case with commercial vehicles at present.

The ministry in their press release explained that the new schemes would make it easy free movement for personal vehicles across all Indian states on the relocation of the concerned person to a new state.

This new arrangement of vehicle registration facility would be available for defense personnel, employees of the Union Government of India, state government employees going on deputation, union and state PSUs employees, and employees of the private sector companies or organizations, which have offices in five or more states or union territories of India.

The Ministry press note explained as part of draft rules will make it a lot simpler for those moving from one state to the other to re-register their personal vehicles.

This new scheme is on the lines of several citizen-centric steps and IT-based solutions providing for vehicle registration taken by the Union government.

Nonetheless, one of the central matters in the vehicle enrollment measure that actually needs consideration is the re-registration of a vehicle while moving to another state.

State relocation happens with both government and private sector employees,  said a press release, adding such developments make a feeling of anxiety in the minds of employees regarding the transfer or registration from the one state of registration to the other state.

The Motor Vehicles Act, 1988, explains that while an individual is permitted to keep the vehicle for a year in any state other than the state where the vehicle is initially registered, new registration with the new state-enlisting authority must be made within a year.

In reality, arrangement to get a refund from the initial state on a pro-rata basis is a very complicated process that varies from one state to the other as explained by the press release that’s why the need for the IN series of vehicle re-registration was felt by the Transport Ministry.